EDITOR’S NOTE: Jack Morton photographs Duke basketball and football for WRALSportsfan. For one of Mike Krzyzewski’s last home games, he offered to shoot in black and white, as a creative tip of the hat to the story encompassed in a 40-year career.

I’ve always wanted to shoot something in the colorless Cameron Indoor Stadium, but before this basketball season, I never had a good reason.

When Mike Krzyzewski coached his first game at Cameron on Nov. 29, 1980 (a win over Stetson), black-and-white film was basically universal for sports coverage (unless you were Sports Illustrated).

Here we are 41 years and three months later, with Coach K sidelined for just two more home games, and it seemed like a good opportunity to document in retro style.

Shooting in “monochrome”, which I often do when shooting weddings, requires a completely different approach and experience; you’re very attuned to light and shadow, brightness and contrast, and the undertone of a color is the only really relevant aspect of color that matters.

Duke basketball games always have a “mood” because of the intense emotions, but also because of the location. Photographing basketball for over 12 years in Cameron has been a treat for a basketball enthusiast raised on Tobacco Road, but also for a photographer who appreciates the creative possibilities that come with such a unique setting. 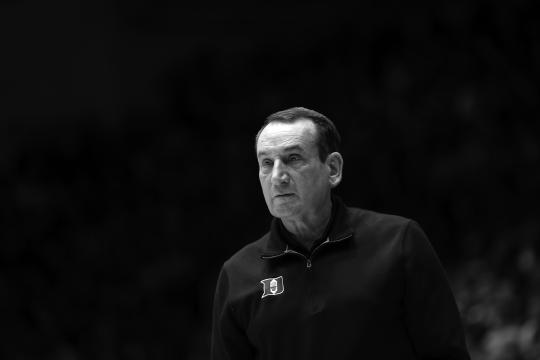 Hopefully my footage of the Florida State/Duke game will provide an “old school” perspective reminiscent of that first season so many years ago.